The Balloonfish looks very similar to the Porcupinefish, but the  Balloonfish has NO spots on their fins. They are also much smaller growing to a maximum of 20". They have large, conspicuous spines on their heads and often have two or more spines on their backs that remain erect even when not inflated. They can often be seen near recesses and cave opening, under overhangs and other protected areas and also hiding in the tall sea grass beds. Tan/olive colored body, brownish band running from eye to eye over the back. They  have a yellow iris. If they see you, make very slow movements toward them they will be fairly tolerant relying on camouflage.  They have the ability to inflate themselves to three times their normal size by swallowing water or air. The first three pictures are of baby Balloonfish that are about 2 inches long. They were taking refuge in the Mangrove roots. There were hundreds, if not thousands, of them. Cute!

A new study shows that when puffer fish inflate themselves as a last resort when being molested or threatened, it is extremely hard on their systems. Once they inflate they become more vulnerable to predation. So, do not molest these fish, trying to get them to inflate. it may cost them their lives. 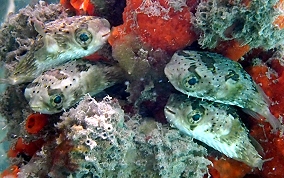 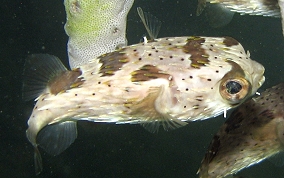 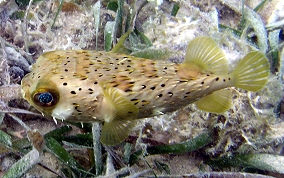 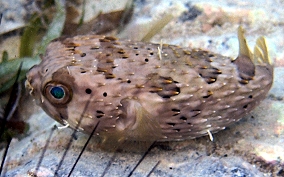 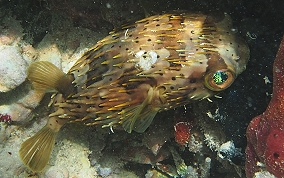 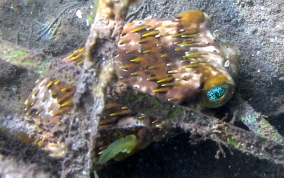