The first set of pictures were taken at night in about 8 feet of water. This was a small juvenile who was out scavenging for food. This little creature was an absolutely beautiful animal. These octopus are solitary except for mating. They only lay from 500 to 1000 eggs. Other octopus can lay up to 200,000 eggs.

Adults can grow to a size that includes a 24 inch mantle. They inhabit waters at depths of  2 to 75 feet.

The second set of pictures were taken during the day in less than 3 feet of water. When I spotted this octopus I knew immediately this was not the Common Octopus, but one that is NEVER seen during the day (until now) the Caribbean Reef Octopus (Octopus briareus). It was as if he was sleeping (note closed eyes). They are known to lay flat, spread out like a parachute. Perhaps he was out because it was a darker cloudy day and about 4:30 in the afternoon. They have extremely long arms (4-6 times their body length) and a darkness around the eye that is not a characteristic of the Common Octopus. They also do not have the dark edges around the arm's suckers and the skin papillae are more like little spikes than flat wedges like the Common Octopus. 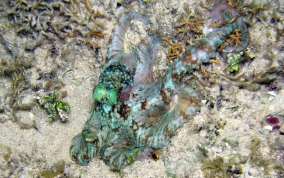 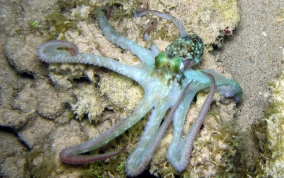 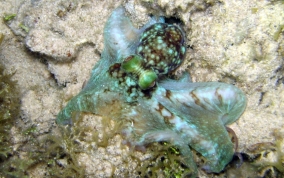 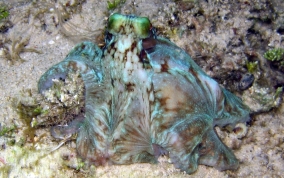 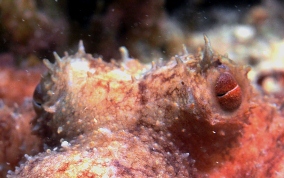 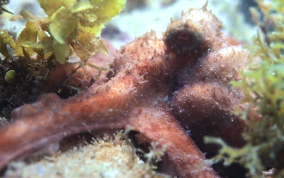 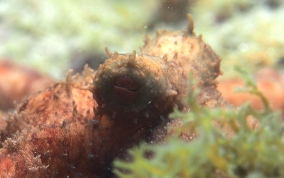 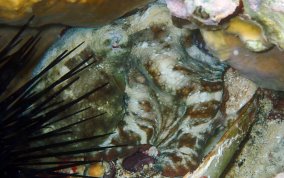 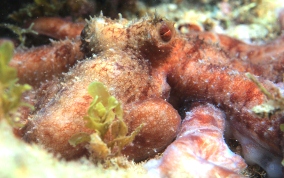