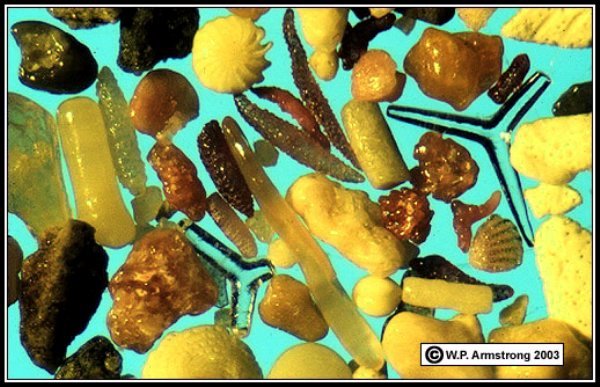 These are grains of sand from the beach at Cinnamon Bay, St. John, USVI. Courtesy of  W.P. Armstrong. (copyright reserved) The grains include porous fragments of brightly-colored corals, minute foraminifera shells, fragments of sea shells and shiny, star-shaped sponge spicules.

When Dr. Gary Greenberg turned his microscope to beach sand, he too "discovered gemlike minerals, colorful coral fragments, and delicate microscopic shells, revealing that sand comprises much more than little brown rocks.  You will never look at a beach the same way again."  comments Dr. Greenberg on his web site.  See more of his work with magnified grains of sand from various places around the world at (along with some other subject as well) at:  Sandgrains.com

Three sponge spicules surround a blue spiral sand grain. Sponge spicules are the internal skeleton of most species of sponges. They are made of silica. 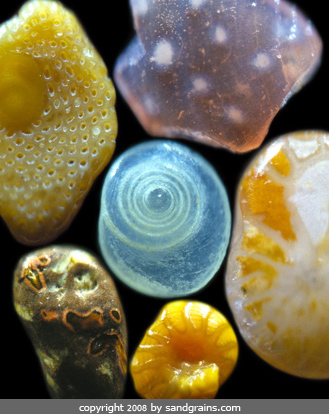 The tip of a spiral shell has broken off and become a grain of sand. After being repeatedly tumbled by action of the surf this spiral sand grain has become opalescent in character. It is surrounded by bits of coral, shell, and volcanic material.

And as to planets:

If a grain of sand represented an ENTIRE galaxy; so each grain of sand, or galaxy, contains 100’s of billions of stars, you would need to fill six rooms full of sand to contain all the galaxies (10,000,000,000,000,000,000,000 of them) in the known universe. If you drilled a tiny hole in one of the grains of sand which represented our  Milky Way galaxy,' the hole would be the area that we have been capable of searching for planets so far. As of 1 May 2020 , there are 4,058 confirmed planets in 3,033 systems, with 658 systems having more than one planet. There are many methods of detecting exoplanets. ... see a visual representation at BIG PLAYGROUND

snorkelstj.com copyright 1996-2021
Please write to: info at snorkelstj dot com. Please respect the time and effort and expense to create this site. All text and photos are Copyrighted unless clearly noted otherwise. No use is authorized without written permission.