The largest of the Porcupinefishes, growing to two feet in length. Their heads are the widest part of their bodies. Can often be seen near recesses and cave opening, under overhangs and other protected areas. Occasionally are they out swimming about during the day. Tan, brown body with brownish black spots over their whole body including fins. They can pale or darken with dark patches. If they see you, make very slow movements toward them they will be fairly tolerant. When in the open water, if startled, they will move off fairly quickly. They have four large teeth, fused into an upper and lower plate, which are used for crushing the shells of crustaceans and mollusks, their natural prey. They have the ability to inflate themselves to three times their normal size by swallowing water or air. They have large conspicuous spines. When it comes to mating, the males creates what could only be called an elaborate nest of sand on the sea floor in order to lure a female. To create the pattern the males swims in circles hour hours using his fins. If a female likes the nest, they mate and she lays her eggs (up to 200,000). The tiny, eggs stick to each other and settle to the bottom in huge masses in the center depression. The grooves of the pattern act as a water current buffer, preventing the eggs from being carried away by the current. They hatch in about five days. When first born the larvae are brightly colored and begin feeding three days after they hatch. Young puffers are capable of inflating at seven days old when they are less than a half-inch long. The first three pictures are of baby Porcupinefish that are about 2 inches long.  They were taking refuge in the Mangrove roots. There were hundreds, if not thousands, of them. Cute! 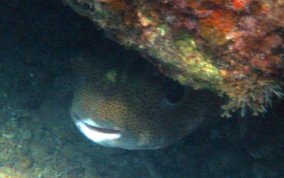 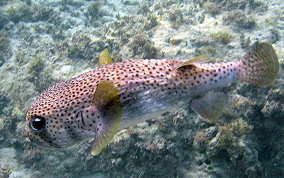 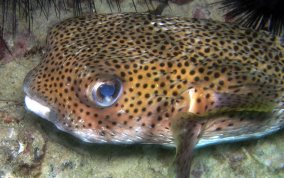 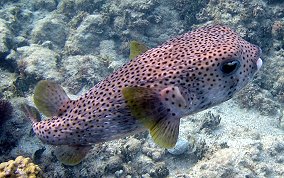 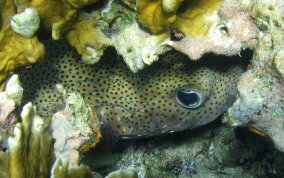 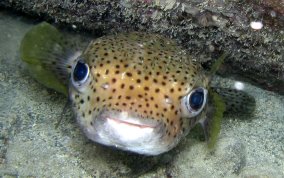 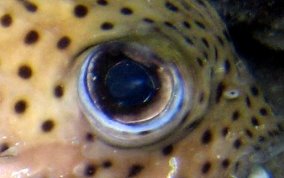 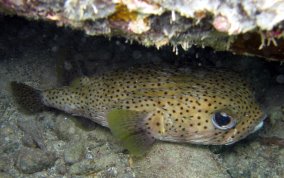 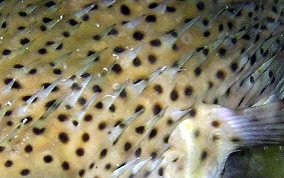 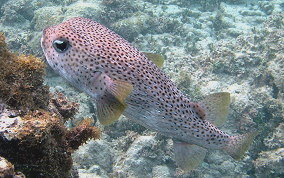 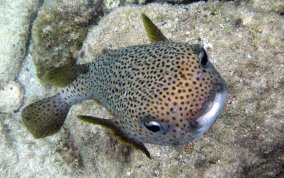